The 6th World Thrombosis Day in the Slovak Republic 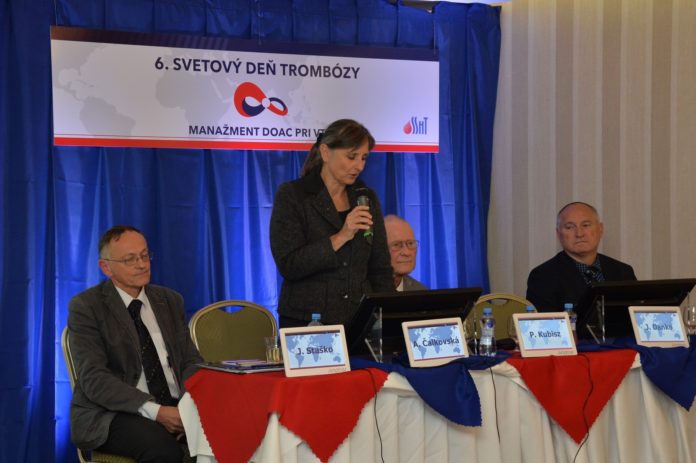 On 8 October 2019, the activities on behalf the 6th World Thrombosis Day (WTD) in Martin, Slovak Republic were prepared. The event was traditionally organized under the auspices of the International Society on Thrombosis and Haemostasis (ISTH), the expert garant in Slovak Republic was the Slovak Society on Haemostasis and Thrombosis (SSHT, The President of the Society Peter Kubisz, prof., MD, DSc.) of the Slovak Medical Society (SMS) (Figure 1)in the cooperation with the Slovak Angiological Society (SAS, The President of the Society Juraj Maďarič, assis. prof., MD, PhD., MPH – in his absence represented by Viera Štvrtinová, prof., MD, PhD.) of the SMS.

The event was also under the patronage of the Dean of the Jessenius Faculty of Medicine in Martin, Comenius University in Bratislava (JFM CU), Andrea Čalkovská, prof., MD, DSc. (Figure 2) and the Head of the City Council (Mayor) of the City of Martin Ján Danko, prof., MD, PhD.

As informed in the official campaign materials of the WTD, unfortunately, it is still a fact that 1 of 4 people worldwide dies due to the complications of thrombosis (1). Therefore, at the opportunity of the anniversary of the birth of a professor Rudolf Virchow, the physician markedly contributing to the description of the etiopathogenesis of thrombosis, the organizing society wanted to underline the risk factors and prothrombotic clinical situations, diagnostic and treatment possibilities, and mostly the prevention of venous thromboembolism (VTE).

From 1 October, 2019, the information citylights promoting the oncoming 6th WTD were placed in the various parts of the City of Martin.

Except this, the information about thrombosis and 6th WTD was available in the articles in the regional newspaper MY Turčianske noviny and at the webpage of the City of Martin martin.sk.

Tomáš Šimurda, MD, PhD. discussed the risk factors and basic features of thrombosis, as well as the planned activities organized on the occasion of the 6th WTD with the people from the audience in the relation entitled the Laidy´s Club in the Radio and Television of Slovakia (RTVS) and TV Turiec (Figure 4).

In the course of the WTD, people had the chance to ask and discuss the topic of thrombosis in the information stalls at the entrance to the University Hospital in Martin, in the centre of Martin and in the front of the Slovak Chamber Theatre (Figure 5).

During this day, people might also get advice and consult their health problems regarding thromboembolism including its prevention, symptoms, diagnostics and treatment with the physicians of the National Centre of Haemostasis and Thrombosis (NCHT) in Martin.

The need of the movement as the simple and available method of the prevention of the thrombosis was underlined in the form of the recreational Run against thrombosis with the start near the shopping centre Galéria in Martin, supported by the former representant of the Slovakia in the athletics Pavol Zemko, MSc.

The excercise in the gym was one of the further movement activities of the program of the 6th WTD. People had the opportunity to do the exercise in the partnering fitness centres and to improve their physical condition in the swimming pool of the City of Martin. Moreover, the examples of the effective and simple exercises were shown to older people in the local Senior Club.

Inhabitants of the City of Martin could also order the food prepared according to the health menu in the selected restaurants.

Seniors who are simultaneously the students of the “University of the third age“ of the JFM CU and students of the 7th year of study at the 8-year-grammar school of Jozef Lettrich in Martin could listen the lectures of Ivana Plameňová, MD, PhD., MBA about the risk factors and circumstances of the development of VTE, learn about and try to provide the acute first aid in the cardio-pulmo-cerebral resuscitation according to the advice of professional lecturers (Figures 7-9).

The sample of the consequences of VTE in the individual life were discussed in the interview with the patient diagnosed previously with VTE (Figure 10).

The whole-day program with a wide scale of activities ended with the expert program for the physicians, pharmaceutists and further medical workers in the Hotel Turiec in Martin in the form of conference.

The conference was opened by the speech of the Dean of JFM CU Andrea Čalkovská, prof., MD, DSc., Economic Director of the University Hospital in Martin Stanislav Škorňa, MSc. and the President of the SSHT Peter Kubisz, prof., MD, DSc.

The first section of the program was composed of the presentation of the case reports of the patients with the bleeding disorder of haemostasis who experienced thrombotic episode or the patients in which thrombosis and also bleeding occured. These presentations were considered to be quite controversial, as there are many reports about the bleeding complications in the treatment with antithrombotic drugs, but only several cases published about patients with bleeding disorder of haemostasis and thrombosis. The lectures were given by Tomáš Šimurda, MD, PhD., Lucia Stančiaková, MD, PhD. (both from the National Centre of Haemostasis and Thrombosis (NCHT), Martin, Slovak Republic), Viera Štvrtinová, prof., MD, PhD. (Department of Internal Medicine II, Faculty of Medicine in Bratislava, Comenius University in Bratislava, Vice-Rector for the Quality of the Comenius University in Bratislava, Slovak Republic) and Jaroslav Malý, prof., MD, PhD. (Department of Internal Medicine and Haematology IV, Medical Faculty in Hradec Králové, Charles University in Prague, Czech Republic) (Figures 11 and 12).

In the session focused on the thrombosis and thrombophilia, Juraj Sokol, assoc. prof., MD, PhD. (NCHT, Martin, Slovak Republic) reviewed the genetics of the sticky platelet syndrome and the problematics of the paroxysmal nocturnal haemoglobinuria as the further possible cause of the development of thrombosis. Lucia Stančiaková, MD, PhD. (NCHT, Martin, Slovak Republic) presented the use of low molecular weight heparin in the high-risk pregnancy.

The possibilities of the reversal of the effect of the DOACs from the neurological point of view were the topic of the lecture of Michal Kováčik, MD (Hospital with Polyclinic of Aurel Stodola, MD of Liptov, Liptovský Mikuláš, Slovak Republic). Matej Samoš, assoc. prof., MD, PhD. and Tomáš Bolek, MD (both from Department of Internal Medicine I, JFM CU, Martin, Slovak Republic) discussed the selected issues in the treatment of the patients with non-valvular atrial fibrillation with DOACs from the side of a cardiologist.

At the end of the expert program, the Head of the Department of Haematology and Transfusion Medicine of the JFM CU and University Hospital in Martin, Ján Staško, prof., MD, PhD. thanked all attendants for their participation and simultaneously invited all of them to the 7th WTD that will traditionally be held in October 2020 in Martin, Slovak Republic.

The 6th World Thrombosis Day in the Slovak Republic